Celebrating the everyday. Architectural sculpture with attributes of work, transport, commerce and finance 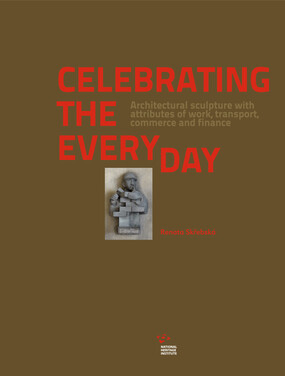 This book is the result of a long-term process of researching, evaluating and documenting architectural sculpture depicting themes related to work. It includes an electronic map (Nmap) containing information that enables users to search for results according to location, date, iconographic type and authorship, as well as providing more detailed data from the results of the research than can be presented here within the space constraints of this publication. The author is also involved in a parallel project in collaboration with the Gallery of Fine Arts in Ostrava, which situates architectural sculpture depicting work within the wider context of developments in the art world; this project is presented in the gallery’s exhibition “Workers Die, But Work Lives On” (including a Czech-English exhibition catalogue). The author’s research was conducted as part of a large-scale project entitled “Industrial Heritage from the Perspective of Heritage Management”, and it set out to document the development of this type of architectural sculpture during the course of the 20th century. This time frame is only an approximate delineation; the electronic map also includes works from the last three decades of the 19th century, as certain elements that went on to play a key role in subsequent developments were rooted in this earlier period. The majority of the examples of architectural sculpture presented in this book date from the 1920s to the 1950s. In later decades, this type of architectural sculpture fell out of favour, as there was an increasing tendency to leave the façades of industrial buildings unornamented and instead to situate free-standing sculptures in their vicinity. Additionally, works of sculpture situated next to industrial buildings increasingly tended towards abstract forms; explicit treatments of themes related to work became largely the domain of free sculpture. This is the first comprehensive research into this topic that has been conducted in the Czech Republic. The topic has been touched on by studies exploring social art or the Civilist movement of the inter-war years (as well as by monographs on individual sculptors), but these studies generally focus more on free sculpture; architectural sculpture is only mentioned occasionally.